A major part of the experience of living in (or even visiting) another country is the opportunity to see how other people live: what they eat, how they travel to work, how they form and maintain friendships, how they feel about PDAs, and so on. This has, overall, a hugely positive effect for the majority of people. It challenges us to step outside our own habits and expectations, encourages us to examine the norms and practices we may take for granted as “normal” and forces us to define our own values and the truths we choose to hold constant, no matter where in the world we may be.

No, this is totally the best possible place to leave your hat.

It can also be really, really hilarious.

Let me preface this by saying yes, I’m well aware of the idea of cultural relativism, being conscious about not making value judgments about the practices of others, etc. I know. I know. But just because I observe things and try not be too judgmental about them doesn’t mean I can’t find them incredibly amusing. Because let’s be serious, there are some things they do in other countries that are just weird to us Americans. I have no doubt that there are plenty of things Americans do or like that people in other countries find utterly baffling, too (The NFL? Standing outside stores for like 48 hours to buy limited-edition pairs of sneakers? Putting ranch dressing on everything?), but as an American, I’m rather unable to speak to that side of things. 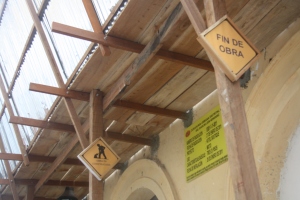 "Under construction"/"End of work." This would be slightly more logical if the signs were not within about ten feet of each other. Which one am I supposed to believe?

However, as an American in Bogotá, I am in an expert position to observe the things that rolos (the term for denizens of Bogotá) seem to love that are totally mystifying to a foreigner, and I think some of them are worth sharing, even just for the humor. So over the next few weeks I’m going to work my way through some kind of list of my Top 10 Things Colombians Rather Inexplicably Love. The last thing I want, though, is for this to seem in any way mean-spirited or critical. Let me state for the record that I love Bogotá, I love Colombia and I love the people I’ve met here so far. This isn’t meant to make fun of anyone, except perhaps myself for being so weirded out by some things, or humanity in general for its habit of following bizarre trends. Still, just to keep things fair and balanced, I’ve decided to follow this list up with another one, of the Top 10 Totally Awesome Things Colombians Love (And Which We Could Do With More Of In the U.S., If We’re Being Honest). So keep an eye out for these as they come!