Considering how much I love eating, I suppose it was only a matter of time until I submitted to my overwhelming desire to resort to the loved-yet-feared Food Blog Post. Since I expect this to be somewhat of a recurring theme over here in arepa-land, I’ll keep this contained to some specific foods, instead of trying to write about All Of The Foods. Also because if I write too much more about food, it’s going to make me hungry again, and I am pretty much out of food in my kitchen and entirely unwilling to dash to the grocery store amid the softball-sized raindrops out there. So! Onwards! 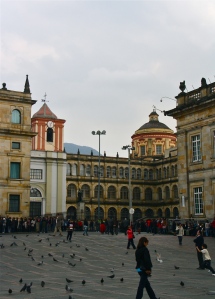 As I’ve mentioned, La Candelaria is the old, historic, touristy, university-student-filled, kinda-sketchy-at-night neighborhood in Bogotá. In addition to its well-deserved reknown for its colonial architecture, the president’s house, and a certain wonderful church that looks like it’s made of candy, Candelaria is also the place to go for somewhat overpriced but allegedly authentic and entirely delicious Colombian (or, more accurately, Bogotana) food.

In the past two weeks, I’ve hit up Candelaria for food twice, with vastly different experiences and somewhat different results. Spoiler: in the end, it was all delicious. But, as usual here, there were a few bumps along the way.

Rewind about two weeks to a Saturday afternoon, when a friend and I had an intense craving for ajiaco, which is probably Bogotá’s most famous dish. It’s a thick stew made with chicken (or not, if you’re one of us weirdo veggies); three kinds of potatoes, including one that is native only to Colombia; half an ear of corn on the cob; and topped with capers, cream, white rice and avocado, which are brought out on a platter with the soup and are meant to be added at the table. Ajiaco, with chicken or without, is DELICIOUS. It is exactly what you want on one of Bogotá’s (constant) rainy afternoons, and it is filling as nobody’s business. If you’re going to be eating ajiaco, you pretty much have to plan to eat nothing else for the rest of the day, because your stomach will be busy churning all those potatoes around (and being blissfully happy about your gastronomic and life choices).

Here’s the thing, though. Ajiaco is lunch food. It is not dinner food. In the States, we’re generally pretty open to people playing around with food conventions: changing orders, places that only sell cereal, the glorious phenomenon of breakfast-for-dinner, etc. Here, not so much. Apparently when you’re a waiter at one of these tourist traps who is probably (and somewhat justifiably) sick of people doing horrible things to your language, two gringas strolling in and ordering ajiaco at 6:30 on a Saturday night is just too much to bear. But, since you’re Colombian, and Colombians are masters of indirect passive-aggression when it comes to things like this, you will initially offer no hint of malice. Indeed, you’ll quickly offer the menus, take the order with minimal judgment apparent on your face and bring out the tasty bowls of soup and plates of accessories in what seems like record time.

Then you will proceed to ignore your customers. Forever. You will resort to such measures as standing in the entrance with your back to the restaurant, hiding behind the counter to eat your dinner and looking at the ceiling or ground every time you pass near their table so as to make the goal of eye contact impossible. You will do this for nearly an hour, at the end of which time said gringa customers will be so tired of trying to catch your eye to ask for the check that they will simply get up and pay the other server standing at the counter — after briefly considering whether an attempt to flee the premises will finally merit your attention. You will not even look at them as they leave. When you leave work for the night, it will not occur to you that there are any flaws in your customer service skills.

Chocolate, bread, butter and cheese: my idea of a complete, balanced breakfast. Or lunch. Or dinner.

So. Never going back to THAT place. I apologize for not taking any photos of the tasty ajiaco, but I was intimidated by the waiter’s less-than-accommodating attitude.  I had much better luck when I returned the next weekend, closer to mid-afternoon on a Sunday. We went a few doors down from the place with the hateful waiter, and tucked ourselves into a table in the back of the restaurant, which is one of four nearly identical restaurants perched in a row on a small side street directly off of La Candelaria’s Plaza de Bolivar. As we were in the center of traditional food, we had no choice but to order chocolate santafereño completo (Colombian hot chocolate). They’re big fans of hot chocolate in general here, and it’s hard to go wrong with a drink make of the best food in the world, but the chocolate completo is something special. It arrives at the table on its own small platter, surrounded by slices of bread, butter, an almohabana (sweet cornmeal roll) and a slice of cheese, which tradition dictates that you submerge into the chocolate. Like a good tourist, I tried it, but found that as much as I love both chocolate and cheese, I think I’ll generally try to keep them separate from now on. It’s not that it tasted bad (it’s hard to go wrong with either of those things), but they don’t really gain anything from the combination.

You can barely even see the pig's feet! They obviously belonged to some pretty sneaky pigs.

And then there was the food. Again, feeling adventurous, but not up to the challenge of tackling another bowl of ajiaco, two of us opted to try to the caldo de frijoles, which is essentially just a big bowl of beans and some veggies — or so I thought. Turns out this particular antioqueño recipe comes with some very special extra flavoring, in the form of pezuñas (pig’s feet). Whoops. Vegetarian fail. For the record, I didn’t even know what pig’s feet looked like, much less how they tasted, but now I can at least attest to the former: weird, bony and incredibly fatty. I ended up quarantining the pig’s feet and still ate my weight in a very satisfying bowl of beans, but I’ve certainly learned not to assume that just because my Spanish is pretty good, I won’t still get fooled into ordering the occasional bowl of beans with pig’s feet.

Oh, and Happy Leap Day, y’all! Hope your respective celebrations are free of unwanted meat-bits (but filled with the wanted kind)!