It’s rainy season in Bogotá – insofar as a few weeks can be a season, that is. It can be, though, which is something you learn when you move here: seasons can be hours, or days, and a month can seem like a year when the clouds move fast enough. Coming from a place where seasons are essentially a clockwork three months each, with maybe a stray April snowstorm or extended summer day in October to keep us all on our toes, it’s a tough adjustment. It still seems wrong, for example, that people can squint up at the sky, check to see whether it’s partly cloudy or partly sunny (the meteorological version of water levels in glasses) and say confidently that it’s either summer or winter. It seems to run counter to everything we learn in school, when we study the Earth’s rotation and day length and sunset times. And yet, after two years here, I’ve started to buy into it, too – into the idea that winter can descend over the mountains like nightfall and lift again just as easily, when it’s 2 p.m. or a Sunday, or that summer has nothing to do with temperatures and everything to do with the appearance of shadows.

Sometimes I suspect that Bogotá’s rainy season is the city’s way of testing people. Can you hack it? Can you find ways to stay positive, stay busy, stay upbeat when the mountaintops disappear behind apocalyptically dark clouds that almost make you believe in black magic? Can you find shoes that will bear you across the three-inch rivers rushing through the streets, find ways to jump to the side before the buses whizzing past throw cascading waves of water the height of a small child over anyone unfortunate enough to be standing within the blast radius? Can you keep from fighting back against your alarm clock when the first glimpse out the window reveals only gray, rather than the normal early-a.m. jewel-toned sky?

It’s all a test. The city is testing us, waiting for us to prove that we deserve to make it to the clear light and holidays in June, the kite-filled skies and festival days of August, the shimmering lights and warm drinks of December. We don’t have snow, but we have days so dark that the idea of sunlight seems foreign. We have hailstorms that appear out of nowhere, and roads with insufficient storm drains. We have whiplash-inducing variations in temperature and precipitation strange enough to make you suspect it might really all be tied to the movements of a butterfly in Indonesia, or the mood swings of a three-year old in Portugal.

And if all that doom and gloom isn’t enough for you, well, it’s election season as well. The jury is still out on that one, as far as silver linings are concerned, but we’ve got to hope there’s sunlight at the other end, too. 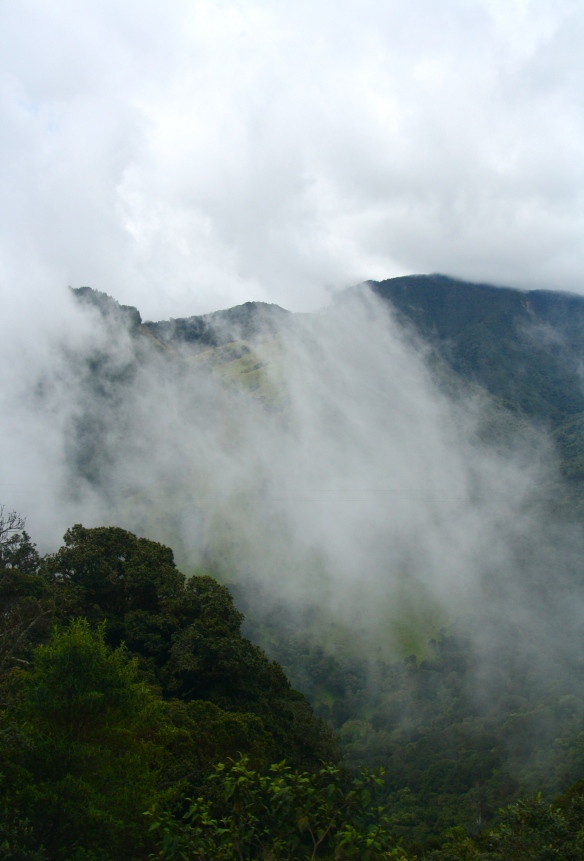 Sometimes in the Andes, you’re so high up that the clouds rise to meet you.