Earlier this week, I realized that in all the excitement about zipping around Boyacá and waxing eloquent (and photographic) about all the delicious pastries I consumed in Villa de Leyva, I never actually spent any time talking about the place itself. My bad.

So! Let’s talk a bit about Villa de Leyva, because it may very well be my favorite place so far in Colombia — at the least, it’s a hell of a strong front-runner. Villa is a small-ish town in Boyacá, which those of you paying attention will recall is the department just to the northeast of Cundinamarca, the department in which one can find Bogotá (and me!). As I’ve mentioned before, Boyacá is generally known as one of the more traditional departments, filled with lots of small towns that specialize in something like ceramics or bricks or cheese, and people in hats and ruanas (wool ponchos) to keep off the mountain chill. Boyacá is what comes to mind when people say the word tranquilo — it’s all small plazas and colonial churches and women selling obleas from a small wooden table by the side of the road. 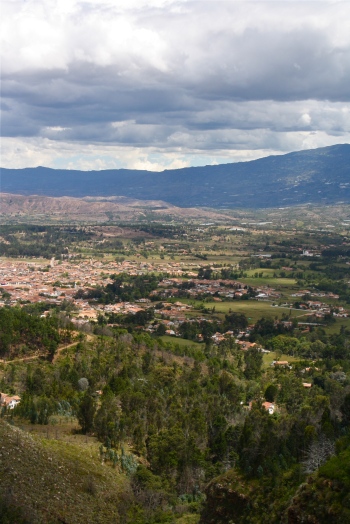 Well, the whole place sure looks small from up here.

As the best-known (at least to non-religious tourists) village of Boyacá, Villa de Leyva is a little bit of a special case. Nestled up against a range of green mountains and straddling the edge of the mountain-desert divide in a valley that once was a vast prehistoric lake, Villa de Leyva couldn’t be more photogenic if it tried. Everywhere you look are pine trees or cacti or beautiful flowering plants, often all within about 100 yards of each other. It’s impossible to cross two streets without someone approaching to offer horseback rides or a hike. The place is filled with opportunities for other low-key outdoorsy activities like hiking, biking or swimming in the occasional waterfall. The desert sky is clearer and bluer than it is in Bogotá, which makes the town the ideal setting for their annual Festival de las Cometas (Kite Festival), a hugely and internationally popular event taking place this weekend. The only way to improve upon the scenery in Villa de Leyva would be to fill it with hundreds of intricate, beautiful kites.

But it’s not just about the natural beauty of the place, although that’s pretty overwhelming. The town itself, as with most Colombian towns, is fairly small: a central plaza, a few calles going this way, a few carreras going that way. But that plaza, Plaza Mayor, is something to write home about — a sprawling cobblestone expanse lined with hotels, restaurants and one 300-year-old church, it’s the biggest central plaza in Colombia and one of the largest in all of Latin America. Needless to say, most of the activity of the town centers around this plaza, from the excellent restaurants on various corners to the radiating streets where wandering tourists can buy everything from alpaca scarves to candy to leather bags that look like they just came off the cow. There’s often a stage set up for events in the center of the plaza, and there’s almost always something going on: when we were there, we witnessed a visiting Venezuelan symphonic orchestra, a poncho fashion show featuring elementary-school girls, a performance of Pacific Coast dance and a concert. As befits its position as the heart and soul of the town, the plaza fills up at night with a combination of locals and tourists, who sprawl across the steps of the church to eat ice cream, share a few beers or just watch their children race around throwing glowsticks at each other. People-watching doesn’t get any better.

The biggest one in Colombia, and it’s such a nice-looking one, too!

I’m no architect, but even I could appreciate the loveliness of the buildings. Everything in the town looks like it was frozen 200 years ago — all white walls and green trim, with porches filled with hammocks and clustered flowers. Plus, all of the streets are cobblestone, which those of us from Boston know is hell on walking if you’re not careful (or stupid enough to wear heels. Remember, we are in Colombia), but also means that cars traveling through town have to crawl at about 10 mph to avoid causing any serious damage. This might be the Colombian town where you’re least likely to be killed by a car.

And don’t even get me started on the food. My friends and I usually subscribe to the “as many things from a cart as possible” school of dining, but we spoiled ourselves a bit in Villa de Leyva, and I couldn’t be happier that we did. Along our gastronomic path, we discovered (not one, but) two vegetarian restaurants, actual salads (few and far between here in Colombia), a place that served both pizza and sangria, the best almond croissants in South America, a bakery specifically for cookies, and some pretty good eggs. We barely made a dent in all of the town’s tasty offerings, though, so obviously a return trip is in order.

But wait, there’s more! Remember how I mentioned the former prehistoric-ness of the whole space? Well, we all know what prehistoric implies, don’t we? That’s right: Villa de Leyva was once home to my second-graders’ favorite animal: DINOSAURS. Sadly, there are not currently any more of the beasts ranging around (as far as we know….), but there is a pretty excellent tribute to their presence, in the form of the small, bright yellow Museo El Fosil, a short drive out of down. For the low, low price of about $4 mil, one can enter and gawk at the complete (or at least it looks that way) remains of a Kronosaurus — a large, toothed aquatic creature (yes, that’s our very own local Kronosaurus smiling at you from the Wikipedia entry). Obviously I could happily have stayed in the museum for a long time, attempting to commune with the beasts, but how could I stay away from all of the other gorgeous sights in Villa de Leyva?

Clearly, Wikipedia stole this photo from me.

Our three days there weren’t nearly enough time to enjoy everything the place has to offer — so it’s a good thing we’re already planning a return trip in November! In the meantime, I’ll have to content myself with ogling these photographs until I’m back in the reality.

The biggest one in Colombia, and it’s such a nice-looking one, too!

Villa de Levya: where the streets have no (clearly marked) names

But at least they have signs on their bridges!

In case you come to Villa expecting to go on a safari, they’ve got you covered.

Heading up the hill for a delightful, sweaty hike (and some great views)

Why don’t my decorations ever look this nice?

It’s not fair that we don’t get clouds like this at home. They need to stop hogging them here.

And then we found the waterfall that everyone else finds! Thanks, subpar old edition of Lonely Planet!

Mostly, thanks to the handwritten map given us by the undoubtedly long-suffering dude working at the nearby hostel. Sorry for being cliche, dude.

Then again, he referred to this as a “small” waterfall, so I question his overall perspective.

I’m just saying, where I come from, this ain’t a small fall. I still wouldn’t want to jump from up there.

Wouldn’t want to jump from up here necessarily either. Rolling down, yes. Leaping, no.

Well, the whole place sure looks small from here.

This part with the rocks here doesn’t really look like the most comfortable rolling hill, though.

This is probably the only room at this mountaintop hotel that’s within our price range. Give me a hammock and I’ll take it.

Oh, maybe this one too. They can’t charge you if there isn’t a door, right?

Ogling Villa de Leyva from above — you can even see the plaza from all the way up here!

I bet this is just what it looked like to those flying dinosaurs. Except with fewer houses. And more water.

The door to heaven, or something rather like it.

This door leads to an unspecified place. I’m sure it’s still pretty nice.

When I’m rich and able to travel everywhere, I’m coming back here and staying at this amazing hotel, and taking pictures of alllll the stained glass.

If I’d known this place was Western-themed, I would’ve invested in a cowboy hat.

Probably the cutest mountaintop trash can I’ve ever seen. Ten points for respecting the environment!

Yeah, this is definitely an original name for your house. Nobody else in Latin America has ever thought of this.

Do you think that other door has a monopoly on heaven access? Because this one looks pretty convincing.

Spying on other people’s conversations, like a good photographer. Or a good spy.

Occasionally I spy on other people’s horses, too. It’s a little less enlightening.

I would like someone to tell me more information about this appealing offer, stat.

When we stayed there, this hostel had no reviews on hostelworld. They were really nice! All you readers should stay there so they have ratings!

Also because it’s really pretty. And you can take exciting photos just like this one!

It was two whole months before the official kite festival, but these folks were already practicing.

If I had a giant awesome orca kite, I would probably look for any excuse to show it off, too.

Descanso is exactly what this place is all about. That, and whale-shaped kites.

And consistent color schemes. White, green and brown or GTFO.

Villa de Levya seems like the appropriate place to sell the substance of dreams.

Beer and sunset in the plaza: weekends as they should be.

Apparently we weren’t the only ones who had this idea. Sorry for the lack of originality.

It’s wisest to approach the Kronosaurus from behind, so as not to startle it.

No need to fear, though! We’re clearly friends already!

It’s not like the prehistoric eras are known for their quality dental care.

These things are old, too. Albeit with rather fewer teeth.

Clearly, Wikipedia stole this photo from me.

Walls made of shells: better for looking than leaning.

I hope they consulted the dino before deciding to paint its room yellow.

Walls, fountains — is there anything we can’t make out of shells??

It seems that “flea market” is one of those rare phrases that translates literally. Although this market also looked like it might have been full of actual fleas.

Did you know that they grow coffee here?

One last look at the plaza before departing. Until we meet again, Villa de Leyva!